Alright, so friend of mine popped up during his week off from this university of applied science or something (looked up translation from google), and brough his laptop for me to make custom paintjob for it. Alright. Though, most of the time we spent gaming or brainstorming on what was going to be painted on it.... In the end we decided on some cool nebulas and custom Solforce logo from Sword of the Stars game.

So, here's images of the progress:

First, the laptop before anything was done it... 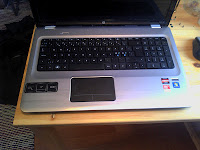 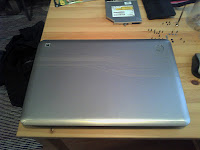 Next, cleaning it up a bit as well taping the areas that do not need painting. The HP logo was rather challenging to cover properly... 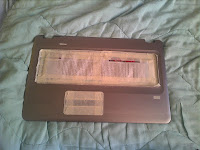 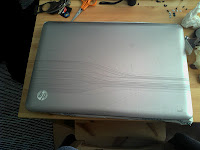 Next stage, adding base paint, half-matte black. It already looks different from the aluminium grey. 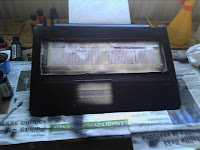 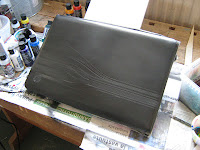 Black and white shaping of nebulae and stars. Had never airbrushed nebula before so it was a bit of challenge to figure out how to do it properly. Ended up ripping up pieces of paper and using the ripped edges as stencils of sorts. Seemed to work rather nicely. Also used pencil with the airbrush to splatter around the stars. 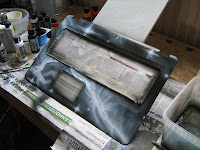 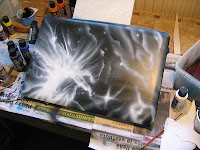 Finally getting to add color... Started with red, then added bit of violet, and then blue for the keyboard. On the lid though, started with red, added white, then orange, more white, yellow, again bit of white and finished the other side with blue. 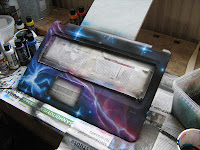 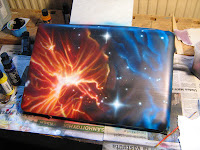 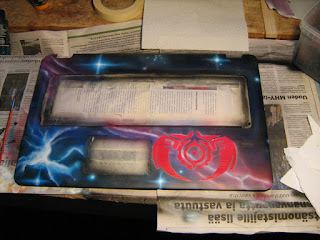 Final stages of the painting, adding varnish, sandpapering it a bit, adding more, more sandpapering... You know the drill. Still, it was worth it since the surface became nice and smooth to touch as well quite shiny. 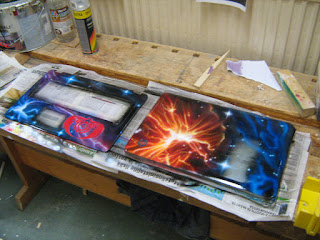 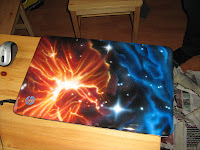 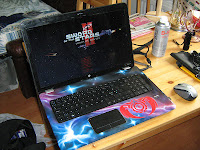 Overall, was rather interesting project since I had to figure out and use some new techniques on the spot to make the nebula look as right and realistic as possible. Also first time putting as much effort into the varnishing since it was this time on a surface that would suffer slightly more stress than usual...