Warrior of the Empire

Haven't been able to work on much things lately, but got this one at least. Originally intended to just leave it as sketch, but then got into my head to add colors, paint on it and stuff, sooo it kinda turned into speedpainting of sorts... Took me around 4-5 hours from start to finish. 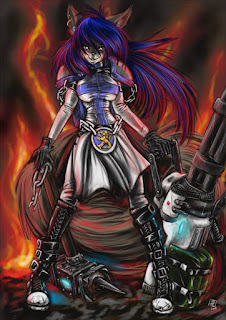 While I was making this pic, I also recorded the whole process (albeit kinda accidentally at first, until I noticed it later on). I've uploaded the video to my youtube account over here: http://www.youtube.com/watch?v=jXhcKshMfug
Did some editing, though not quite good, as there's few places where it pauses for a few seconds or my music player pops up now and then... But at least, managed to compress it from 4-5 hours down to 8-9 minutes and add music. So yay.