Just adding two more images of my first airbrush project and how it has progressed. 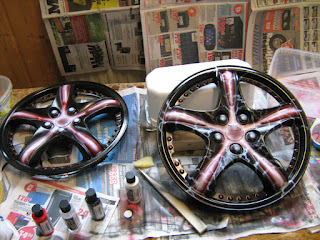 Here, started adding details at first with white. Took a bit to figure out how to make properly thin lines, though, so there's couple spots here and there where I put in too much paint... At least they didn't start leaking around like when I added the red. 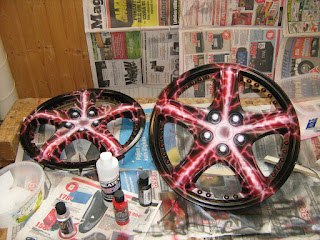 Next I coated the whites with red, so the 'glow' came out from 'em. Went better than I expected now. Though, I had some trouble when adding the whites again to detail the lightning... Apparently the white color behaves slightly different from the others so far, I think. Or I'm just going wrong about something here. Eh, I'll figure it out. Still, the hubcaps turned out kinda nice. Just need the coating now. Will post photos once that's done.
Posted by s0lar1x at 11:48 AM