Haven't done much lately besides few commission pieces and some doodling. Been lacking in... motivation, I guess. And inspiration. Been mostly reading up on stuff and playing games, trying to find those. Other times, it's just been real life mucking up things and the like. Here's some shots of what I've gotten done, though: 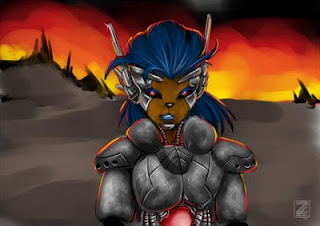 This one's a sort of speedpainting attempt. Took maybe two hours to finish, I think.

Bit of a sketch of new painting I'm working on at the moment. Might post some progress pictures later.
Posted by s0lar1x at 2:42 PM No comments: